SENSIBLE ADVANTAGES OF ULTRASOUND IMAGING FOR BURNS AND DERMAL TRAUMAS 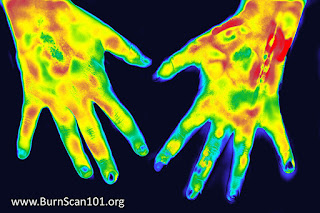 For most emergency responders and physicians, identifying the degree of any burn or dermal trauma cases starts with a visual assessment.  With professional training and enough experience, the professional eye can differentiate between first, second and third degree burns to initiate the proper treatment process. First-degree burns commonly show redness, and swelling only on the outermost skin layer; second-degree burns show surface injury to the underlying layer with blistering and Third-degree burns affect up to the deep layers of the skin.


As standard practices continue to evolve, diagnosing any advanced burns are now calling for new considerations for the prevention of burn-related complications.  As more and more after-effects from high degree burns have left patients with lasting (and sometimes fatal) results, it may no longer be enough to drive a treatment protocol based on surface topical healing.

BURN SCANNING TECHNOLOGY: ASSURANCE AGAINST COMPLICATIONS
Second and third-degree burns may show blisters and red skin but with today’s many non-invasive subdermal technologies, you can now identify the depth of the burn and what the injury truly means under the skin. Identifying the exact DEPTH of the internal injury as well as monitoring (visually) its internal impact/effect on the body may uncover and predict other potential health issues such as: 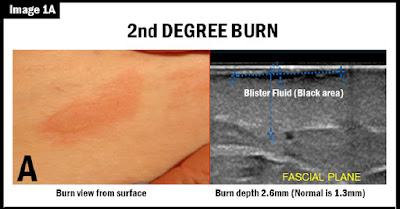 According to Image 1A, high resolution sonogram used a standard probe for skin imaging showing the black area, which is just below the white line of the surface and the black fluid corresponds to the blister seen on the specimen of the burned area. Now below it you see the skin with the first vertical blue dotted line and it goes to the fascial plain white line, which shows swelling of the tissues. The normal skin measures 1.3 millimeters or thin as a dime and the depth of the burn itself measured is twice that, 2.6 millimeters. So we have a way of seeing the fluid. We have a way of checking the depth of the burn, which is clinically difficult because the eyes cannot see below the skin.   You can see the blister is basically gone because that's the tiny black area above the tissue line- showing almost no fluid left (represented In the blackish area) 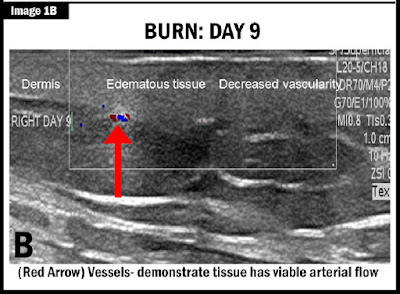 Upon review of Day 9 diagram, see "burn healing" on the left side of this diagram where it says dermis on day 9, you can see the bottom white line under the lettering dermis, which shows the bottom of the skin, which last time was 1.3 millimeters. Then to the right of that the dermis tissue is starting to have the red and blue healing blood vessels that's coming in marked by the red arrow. And then to the right of that where it says decreased vascularity, the larger blood vessels have not yet come in, but at least we know the skin has viable feeding blood flow. So it's more likely than not to heal.

** These images are scanned with the GE Ultrasound Voluson E8.  Any machine over 15 megahertz can be used on burns- however, devices with higher the resolution improves the scan experience to get the best data.

REVIEW OF THE BLOOD FLOW INNOVATION
Today’s imaging devices cover a wide range of functions on the market carrying specific features to fit their many users specific needs.  This scan was generated by the General Electric Voluson E8 system which uses an 18 mhz probe outputting 1/10 of a millimeter of resolution.  The benefit of using this GE 3D Doppler system enables the ability to measure the depth of the burn as well as identify and record the exact amount of fluid in the surface of the burn, which is the blister.

For many diagnostic applications, the real-time scanning ability of VASCULAR ULTRASOUND has greatly advanced the way injuries are read, identified and managed.  Vascular ultrasound uses sound waves to evaluate the body's circulatory system.  It also helps identify blockages in the arteries and veins and detect blood clots.  This innovation is not radiation based, leaving no harmful side effects and out-performs many of today’s current counterparts including accuracy in scanning soft tissues that does not appear in x-rays. 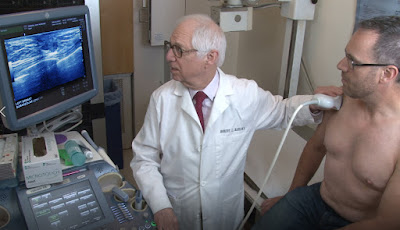 BLOOD FLOW technology is the “diagnostician’s storyteller”.  It allows you to see which part of the skin is alive by the indication of active blood flow through the area- versus the skin that is dead or dying with no blood flow. In cases of burns, the margin of injury can extend once the burn has been completely cooled down. Since vascular ultrasound is safe sound waves, you can conduct frequent scans to monitor healing and progress every hour/every day until resolution.

The paradigm of studying blood flow allows any diagnostician to review whether the tissue is curing or not.  In the case of performing a possible skin graft, the blood flow around an injury gives more data as far as the behavior of the burn or injury as well as the condition of healthy tissue to attach to the burn.

Any inflammatory skin disease is caused by inflammatory blood vessels, which is not evident by the naked eye. This scanning modality allows you to quantify the degree of inflammation and the response to all the new treatments available. Where widely accepted optical technologies work well,  they are limited to 1/2 of a millimeter depth, so they are surface only.

SKIN LIFE VS. SCARS
If the tissue doesn't heal with normal skin, it will scar. The scar tissue appears as black in ultrasound imaging, almost like the fluid- but with zero blood flow.  Any kind of trauma can result in healing tissue or dead tissue, which will either get infected or scar down. Imaging can also show if the area is getting inflamed as it indicates irregular volume of the blood vessels resulting in cellulitis or the inflamed skin.

Scar tissue is dead skin.  Doppler Imaging can be useful as it shows the thickness of the scar to determine if it can be treated, either with steroids, laser or any of a number of current scar treatment technologies.  The depth and the hardness of the scar determines which option to use and all these can be resolved by the various ultrasound technologies. Ultrasound is the new ‘weapon of choice’ to show depth, thickness of the scar, type of scar, how hard or elastic it is  (also see elastography).  It also allows the surgeon to clearly identify the margins you wish to attach the graph to. 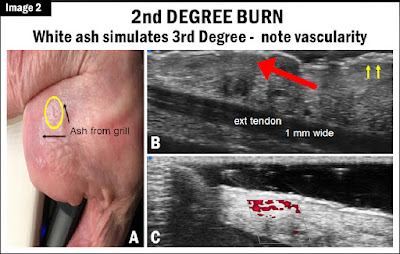 [IMAGE 2] In this image, we have a burn that came from a charcoal grill. This burn leaves a white coating (surface singe) to the red skin. (A) This white surface outline with the black arrows is the ash from the grill or the burning surface. The small yellow circle is the blister that immediately broke from the heat. So the blister burst and opened up causing the teardrop-shaped opening in the skin, which could get infected.
Diagram B shows the two yellow arrows pointing to the white area, it's got a top white, a medium dark, and a bottom white area.  That's the appearing ash visible only on the surface but not penetrating deep (thus it is not a third-degree burn). Upon further interactive review of the burn, it was only surface ash from the surface of the charcoal grill which was easily removable. On the same image (B), we are also looking at external tendon, 1 mm wide.
Diagram C indicates the blood vessels and the normal tissue on the side of the burn. Though the burn goes deep into the skin, it is not a complete third-degree burn in the whole area (B). Comparing B and C, the injury to the burned tissue is marked by the red arrow on top and also the tendon that raises the finger pushes 1 mm wide is completely unaffected by the dark burn area. Now below that since we weren't sure if it was a third-degree burn or we wanted to see if there was viable skin next to it, we did the blood flow technology which shows the micro vessels or the capillaries that are in the adjacent skin, so if you ever needed to graft it you'd have normal skin and also the fact that you have normal skin in the red area means that the burn in that area is a first degree or not really burned at all.

“IT’S ALL ABOUT THE PROBES”
The GE Doppler scanner can go deeper under the skin - at an estimated 5x the resolution than the average ultrasound probe (at 1/10mm resolution). The higher the megahertz, the deeper and sharper the image (like 70mhz has 1/50 of a millimeter resolution).  Such a probe is much better for imaging tendons and skin and the regular 18 or 20 megahertz (such as the GE) that we use routinely use has 1/10 of a millimeter resolution. You have better detail for seeing tendons and blood vessels.

Overall, each probe determines a specific depth, the width & range of the scan, the level of blood flow while the hardware & diagnostic software itself communicates with the probe to translate all data into recognizable images in real time.

PRE-OPERATIVE (AND RISK REDUCTION) PROTOCOL
Among its many uses, cosmetic surgeons can benefit from dermal imaging by mapping the nerves and the arteries before cutting. Also, you can find the dead skin as compared to the normal skin for doing reconstructive surgery.

Emergency departments can more easily treat nerve trauma, burns, tendon injuries with the help of visual analysis of any affected area.  As an example,  you can see if the tendon is partly or completely torn with ultrasound more easily and effectively. you are able to move the finger because it won't be any movement of the torn part. If you move the tendon when you open up the finger from a closed fist position.

ROBERT L. BARD, MD, PC, DABR, FASLMS - Advanced Imaging & Diagnostic Specialist
Having paved the way for the study of various cancers both clinically and academically, Dr. Robert Bard co-founded the 9/11 CancerScan program to bring additional diagnostic support to all first responders from Ground Zero. His main practice in midtown, NYC (Bard Diagnostic Imaging- www.CancerScan.com) uses the latest in digital Imaging technology has been also used to help guide biopsies and in many cases, even replicate much of the same reports of a clinical invasive biopsy. Imaging solutions such as high-powered Sonograms, Spectral Doppler, sonofluoroscopy, 3D/4D Image Reconstruction and the Spectral Doppler are safe, noninvasive, and does not use ionizing radiation. It is used as a complement to find anomalies and help diagnose the causes of pain, swelling and infection in the body’s internal organs while allowing the diagnostician the ability to zoom and ‘travel’ deep into the body for maximum exploration.

Posted by Awareness 4aCure at 1:07 AM No comments:

Awareness 4aCure
Awareness for a Cure is a FREE full service resource publication for all cancer sufferers and survivors on Long Island and its proximity. AFAC publishes existing grants, posts educational how-to's written by professional experts, publishes current L.I. fundraiser news, presents any and all Island-based cancer foundations and showcases survivor stories through the AFAC blogs and Video Channel. AFAC NEWS comprises of covering 5k walks/races and fundraising efforts to raise $$ to find a cure for debilitating diseases. AFAC is established under several non-profit groups: Best Answer for Cancer (tm) and S.I.M.R. (Stoff Integrative Medical Research) and welcomes all cancer-related information for the Long Island reader.