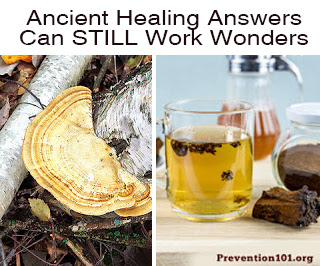 In my unending search for "all answers to cancer", disease is an historically impressive and what appears to be a remarkable healing answer from nature. CHAGA MUSHROOM was first introduced to me by a patient who claims to battle his prostate cancer 'his own way', crediting much of his success to this solution direct from nature. According to The name Chaga (pronounced "cha-ga") originates from the Russian word for mushroom (czaga) which is derived from the word for fungus. In Norway Chaga (kreftkjuke') translates to "cancer polypore" in reference to its fungal appearance and alleged medicinal properties. Research showed the medicinal properties of CHAGA has been used for thousands of years in China, Russia, Norway and other cultures (far older than America). In Norway Chaga (kreftkjuke') means "cancer polypore" describing what is shown to be its medicinal properties.  [1] According to a report in the US Natl. Library of Medicine (NIH), "the analysis of the organic extracts of Chaga revealed birch compounds such as betulin, betulinic acid, and a characteristic fungal molecule inotodiol... observations allow us to consider the therapeutic interest of the Chaga, its chemical complexity, and to emphasize the interest of continuing to investigate mycotherapy potential by associating both chemical and biological approaches." [2]
In March of 2021, NYCRANEWS editors interviewed Debbie Falborn, Pediatric & Home Care Nurse from Sag Harbor, NY and a major wellness resource about the healing powers of Chaga mushroom.  Since her business tenure as co-owner of CHAGA ISLAND INC. (2016-2019), Debbie and partner Bridget LeRoy helped to bring "this  health secret of the east" to many with safe alternatives in anti-inflammatory and antiviral properties through public education and public access to this historically recognized therapeutic option from nature.

In support of INTEGRATIVE research and treatment modalities, recognized leader in Onco-Immunology, Dr. Jesse A. Stoff (NY) supports the global philosophy of drawing answers to cancer from all areas of research, from ancient cultural remedies to modern clinical science. One of the sciences that came out of INTEGRATIVE healing is Immunotherapy - the applied science known as "the smartest and safest ways to battle any disease" by strengthening your body's immune system and let your body's defenses do its job.   They pursue the most basic tenets of logic and a sensible healing plan to attack the patient's health problems and any disease without making new problems (called side effects).  Dr. Stoff trademarked a clever breakdown for what triggers immune disfunction- what he calls "The PITTS"; Poor nutrition, Infection, Toxins, Trauma and Stress. [3]

We originally learned about Chaga mushroom and its medicinal qualities from our prior interview with Jim Hunt and his solutions to treat his own prostate cancer.  Debbie shared her experiences, her research and personal understanding about how this unique treatment solution works.  She employed her talents as a clinician (RN) and a health advisor to cancer patients who showed tremendous success using the mushroom for some of a wide range of health issues.

HEALING PROPERTIES FROM A SINGLE MUSHROOM
By: Debbie Falborn 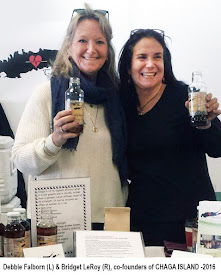 I was introduced to Chaga Mushrooms many years ago by my sister who is also a registered nurse, but light years ahead of me with her background in Oriental medicine. I was in a car accident and I had a very bad neck injury – resulting in surgeries and subsequent traumas from it.  She introduced chaga to me, and immediately I felt amazing levels of improvement in my mobility, my neuropathy and other issues from my injury!

Experts in Chinese medicine are well aware of chaga for their patients, as it has been around for thousands of years in other cultures like Scandinavia, Russia, China etc. Even an article from Sloan Kettering mentioned that chaga mushroom is being used in association with Covid, managing influenza type B like a Tamiflu/ They see it as a preventive to help your immune system and keeps you strong and healthy.

From all the global research, chaga mushroom has an exceptional amount of Betulinic acid which has been found to shrink tumors. It also provides the ability to detox, and many vital supportive nutrients like potassium, zinc, vitamin D- helpful supplements to complement our inactive lifestyle. The way I understand it, chaga mushroom has been recognized to actually change the mitochondria in the cancer cell, where its compounds can actually break down the outer shell up the cancer cell.

HOW DO YOU FIND IT? 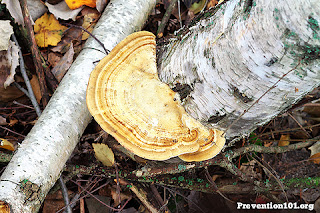 There are specific suppliers online. You can search under “chaga chunks” or “chaga mushroom chunks”. It comes from very cold climates. It needs to be taken off LIVE WHITE BIRCH TREES. It can't be off dead trees - so people need to know where it comes from.  Some science that says that the chaga from Siberia was contaminated by Fukushima because it has to grow for a minimum of 15 years to be hard to stick. So it's a slow growing conch. It feels like wood and it never disintegrates when you cook it.  It will stay this property until all of the goodness is extracted out of it. And then you can just use it as a Tinder in the fire or throw it out. But slow brew it into a tea and it's very strong, very medicinal, and it's pretty remarkable stuff.
GETTING THE WORD OUT
Years later, I formed a successful business around this with a friend (Bridget Leroy) whose son I helped recover from a very long bout with mono within just a few days with chaga mushroom tea. We started promoting Chaga Mushroom chunks in health fairs and farmers markets for weight loss, then for things like skin psoriasis.  But soon after, more and more (young) people started coming around searching for it based on their own research to manage cancer.  Most of them were quite verbal about their cancers and raved about their own findings and success with Chaga.  This helped to drive us to build up the entire distributorship and marketing to expand our community reach, and even expanded the product line to include bottling chaga tea.

The major audience for our chaga business was mainly those who were needing the strong medicinal version (needed more than just a pre bottled tea). They specifically needed the concentrate from the chunks to brew it themselves as part of their entire health program-- many of which involved special diets, other supplements and things tailored to people undergoing treatments or suffering cancers.

With my background as a registered nurse, I made suggestions based on their blood work and their current symptoms & diagnoses.  They integrated the chaga information I provided with those from their practitioners as part of a personal integrative health plan.  I would often check in with many of them from time to time to see how they were doing, and I found a lot of incredible success stories to attest to the efficacy of this tea. 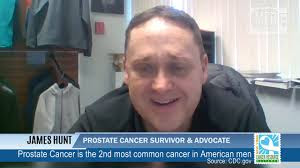 Jim was one of those well researched shoppers at the farmer's market.  He may have sent his mom the first time and I believe she was a wellness or nutrition buff herself. We got to connect by phone at first about his medical history, his lifestyle, his family- and we put it all together towards some kind of a sensible plan alongside working with his physician.  His plan was his own and he did great- he's thriving and doing wonderfully.
WORKING THE BENEFITS OF THE MUSHROOM
During our video interview, Debbie showed us the actual chaga mushroom chunks, looking like dried dark meat in the palm of her hand.

You start with four or five 2 inch cubes, fill up a Crock-Pot that should make enough tea to fill an eight quart crock pot twice.  A rule of thumb is to boil just however many that can fit in the cup of your hand. It gets to be the color of dark maple syrup, and you can drink it warm or cold.  People can sweeten it if they choose to.  I suggest a true stove top boil, better than microwave to get the most out of it. I suggest two cups a day.  Before I started working with so many cancer patients, I used this for DIABETES because it stabilizes blood sugar and blood pressure.

There's different ways of extracting the benefit. Jim Hunt’s version was to brewed it, using four or five mushrooms in eight quarts of water, put it in the fridge then he took it to work every day in his cooler.  In order to get all of the properties out of the chaga mushroom, like the BETULINIC ACID, the POLYPHENOLS, the ANTIOXIDANTS and all the different properties that are in it, it has to leach out into the water. So the only way to make that happen is to slow brew it with a continual heat.

Another way to use it is to grind it into a powder and make it into a tincture with alcohol. It sits for months, and you can put it under your tongue- like any other kind of a tincture.  But for most of the people that I've spoken to (those who are sick), they need the optimal benefit of the tea. And for that is definitely slow brewing it and drinking it out of a cup, like a cup of coffee or tea. That is definitely the best way to do it.

Debbie Falborn closed Chaga Island in early 2020- at the start of the Covid Pandemic due to the regulated shutdowns of all public gatherings.  She remains a recognized figure and an educational resource in the wellness community.  She continues to support patients as a private home care nurse, where chaga mushroom remains a major part of her arsenal in managing her patients.
REFERENCES
1) The History of Chaga in Herbal Medicine (www.thechagaco.com)   https://www.thechagaco.com/post/the-history-of-chaga-in-herbal-medicine#:~:text=In%20Norway%20Chaga%20(kreftkjuke'),topically%20(on%20the%20skin).
2) US Natl Library of Medicine/NIH: "Chaga (Inonotus obliquus), a Future Potential Medicinal Fungus in Oncology? A Chemical Study and a Comparison of the Cytotoxicity Against Human Lung Adenocarcinoma Cells (A549) and Human Bronchial Epithelial Cells (BEAS-2B)" https://www.ncbi.nlm.nih.gov/pmc/articles/PMC6142110/
3) NYCRANEWS: "WHAT IS INTEGRATIVE MEDICINE?"
https://meetourcrusaders.blogspot.com/2018/07/what-is-integrative-medicine.html
4) Gen Info: AlaskaChaga: https://alaskachaga.us/es/blogs/news/the-history-of-chaga
5) Inonotus Obliquus: Wikipedia: https://en.wikipedia.org/wiki/Inonotus_obliquus
6) History of Chaga: http://www.chagagrove.com/509383/history-of-chaga/
Posted by NYCRA NEWS at 7:42 AM