In the mid-sixties, the medical community and the radiological society were dedicated to the pursuit of non-invasive screening and diagnostic protocols through MEDICAL IMAGING. Early mammography was established as a minimally invasive cancer screening protocol.  Other imaging solutions like the MRI, Pet-CT and the ultrasound were also part of this global  diagnostic movement. [00]- (also see our list of cancer diagnostic solutions)

Meanwhile, early forms of genetic testing which began in the 1950's involved counting the number of chromosomes per cell. Deviations from the expected number of chromosomes (46 in humans) could lead to a diagnosis of certain genetic conditions such as trisomy 21 (Down syndrome) or monosomy X (Turner syndrome)....Genetic tests are performed on a sample of blood, hair, skin, amniotic fluid (the fluid that surrounds a fetus during pregnancy), or other tissue.  [0]

In the spring of 2019, our network of immuno-oncologists have alerted us of a new advancement in cancer detection and genetic sequencing. The treatment community expressed enthusiasm over this "GRAIL" protocol in overwhelming comparison to the technologies available in the current market. [1] 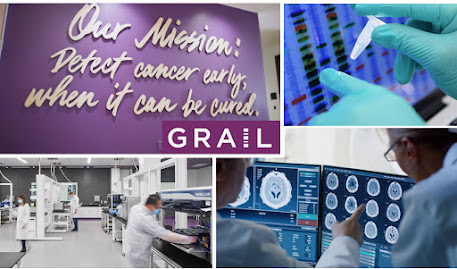 Where the vast majority of cancer pursue the general presence of cancer, GRAIL's screening approach under the Galleri™ program offers a multi-cancer early detection test that promises to "detect over 50 types of cancers... over 45 of which lack recommended screening today — with a low false positive rate, through a single blood draw... GRAIL unique methylation-based technology preferentially targets the most informative regions of the genome and is designed to use its proprietary database and machine-learning algorithms to both detect the presence of cancer and identify the tumor’s tissue of origin."

“Today, the majority of cancers are found too late, when outcomes are often fatal, because most deadly cancers have no available screening tests,” says Josh Ofman, GRAIL CMO. “Current guideline-recommended screenings are critical, but in the United States they cover only five cancers and screen for a single cancer at a time.” [2]

By spring of 2020, news of GRAIL going public with investors like Johnson & Johnson, Arch Venture Partners and Amazon CEO Jeff Bezos. In fall of that same year, it was announced GRAIL would be acquired by Illumina, the company it was originally spun out from to pursue the development of its early detection technology. Other pharmaceutical companies such as Amgen, AstraZeneca, and Bristol Myers Squibb have also joined the growing list of partners.. [3]

• In a comparative response study, an MCED test identified a diversity of cancer signals with high specificity.

• The MCED test predicted the origin of the cancer signal with high accuracy across multiple cancer types.

• Results support the use of this MCED test on a population scale as a complement to existing single-cancer screening tests.

In this pre-specified, large-scale, clinical sub-study, the MCED test demonstrated high specificity and accuracy of CSO prediction and detected cancer signals across a wide diversity of cancers. These results support the feasibility of this blood-based MCED test as a complement to existing single-cancer screening tests. (source: Annals of Oncology link)

ROBERT L. BARD, MD, PC, DABR, FASLMS   -  Dr. Bard received the 2020 nationally acclaimed Ellis Island Award for his lifetime achievement in advanced cancer diagnostic imaging. He co-founded the 9/11 CancerScan program to bring additional diagnostic support to all first responders from Ground Zero. His main practice in midtown, NYC (Bard Diagnostic Imaging- www.CancerScan.com) uses the latest in digital imaging technology and has been also used to help guide biopsies and in many cases, even replicate much of the same reports of a clinical invasive biopsy. Imaging solutions such as high-powered sonograms, Power Doppler Histogram, Sonofluoroscopy, 3D/4D image reconstruction and the Power Doppler Histogram  are safe, noninvasive, and do not use ionizing radiation.

THE 20TH ANNIVERSARY OF 9/11: MEMORIALIZED IN IMAGES

The NY Cancer Resource Alliance, the F.A.C.E.S. Foundation and MOVEMBER hosts the 20th Anniversary of the 9/11 attacks with a special NYCRA-NEWS memorial issue. We proudly feature the powerful and most compelling images of world recognized photographer ANDREA BOOHER - film producer and photojournalist. Ms. Booher has worked as a documentarian for twenty-six years. Based in Colorado, her assignments have taken her to East Africa, Latin America, Micronesia, India, Antarctica, Australia, Myanmar, Somalia, Mexico and Haiti. In the last two decades she has photo-documented every major disaster in the United States, Trust Territories and Sovereign Nations for the Federal Emergency Management Agency (FEMA). Her documentary work resides in several permanent collections, including the National Archives and the Smithsonian. In 2001, she spent 10 weeks working at Ground Zero in the immediate aftermath of the World Trade Center attack. She was one of two photographers working for FEMA with unlimited access. Her work from 9-11 has been published in magazines, newspapers and documentaries worldwide. She was personally profiled on A&E, The History Channel, CNN, Camera Arts, NPR and Photo District News. (see video: "A Return to Zero")
FIRST RESPONDERS DEMAND EARLY SCREENING:
by Lt. Chris Conner/ Bedford (TX) Fire Dept. 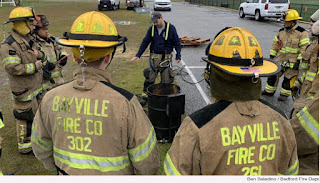 Roughly 7 years ago, my partners and I launched F.A.C.E.S. (Firefighters Against Cancer & Exposures 501c3) and part of our mission was to support the standardization of affordable repeat genetic testing in firehouses nationwide.  We reviewed a wide list of tests for their efficacy and accessibility.  We were attracted to a few strategies for early detection, and for the money, they served their purpose of altering that a simple blood test told you that you 'may' have cancer.  This did not say where, or how aggressive or how it affected you- but the technology at the time was 'state of the art' for its ability to tell you that you had a problem somewhere, and it was up to further testing to dig in and find it (and treat it, of course).
My commitment to reporting cancer diagnostic solutions to the fire service stems from the undisputed fact that we hold a high level of occupational risks from exposures, whereby finding the latest information about new tools ASAP can save someone's life out there.  Hence, learning about GRAIL and how genetic sequencing works, and specifically the ground-breaking improvements they offer the patient community could support our goals of prevention, early detection and accurate monitoring.
As with all medical innovations, regulatory approval and public confidence comes from through repeat clinical trials. I found it impressive that they have been 'polishing' their data for many years before deploying them publicly (see their early Pathfinder study, their Cell-free Genome Atlas Study,  and their concept of a Multi-Cancer Early Detection (MCED) - with over 130,000 enrolled study.  The MCED expanded their scope of identifying the cancer type(s), leading the next stage and direction in testing. If companies like GRAIL keeps up this level of focus and quality research, perhaps someday, fast, accurate regular screening and early readings can be part of our life-saving standard.
ABOUT THE AUTHOR

CHRISTOPHER R. CONNER - Fire Lieutenant/Paramedic at Bedford FDAs a career firefighter, I personally knew the risks of the job and accepted them if it meant helping others. Early in my career, firefighters that I worked with were getting cancer and losing their battles. I didn't have a full understanding why firefighters were getting cancer until one of my mentors in the fire service was diagnosed. Unfortunately, Keith did not overcome his battle with cancer and it became a personal mission for me to help other firefighters. I learned firsthand that cancer is not just a disease that affects the individual, but it also has affects on families and friends. I have initiated and proposed many cancer preventive policies in the fire service. Additionally, I created a non-profit organization to assist firefighters that are diagnosed with cancer.