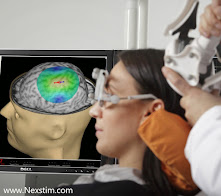 In the continued expansion of the medical society to “go non-invasive” (or non-surgical) and the trending reassessment of interventional medications, the mental health community has acquired major tools in its toolbox to support clinical diagnostic and treatment efforts.  In 2008, the FDA approved the first TMS Depression Device for Depression Treatment [1]. In 2018, the FDA approved the marketing of Repeated Transcranial Magnetic Stimulation (rTMS) as adjunct therapy for of obsessive compulsive disorder (OCD) [2-3].

Current reports have presented an est. 30% of depression cases have a resistance to antidepressant drugs, where Transcranial Magnetic Stimulation (TMS) and the application of Transcranially applied non-invasive neuro-magnetic intervention has shown positive results in combination with antidepressants in patients with treatment-resistant depression[ 4].

During the procedure, a magnetic coil is positioned at the head of the person receiving the treatment using anatomical landmarks on the skull, in particular the inion and nasion.[5] The coil is then connected to a pulse generator, or stimulator, that delivers electric current to the coil.[6] Single or paired pulse TMS causes neurons in the neocortex under the site of stimulation to depolarize and discharge an action potential. [7] Repetitive TMS produces longer-lasting effects which persist past the period of stimulation. rTMS can increase or decrease the excitability of the corticospinal tract depending on the intensity of stimulation, coil orientation, and frequency. [8]
Field Report: TMS Science from the Top Developers
Based on an interview with Nexstim Vice President, STEVE BELLER
TMS, or transcranial magnetic stimulation, is the use of magnets external to the body to activate tissue inside the body (so you're not having to open the patient up).  Based on Faraday’s Law, a magnetic field produced outside of a patient’s head can permeate non-invasively through a patient’s head and induce an electric field that has the capacity to activate neurons in the brain. We induce current at a distance inside the brain and cause the neurons to fire where we induce that current.  This means that where we depolarize, we cause the brains neurons to fire.  TMS artificially stimulates the brain and causes the neurons to fire.  Navigation technology allows us to see precisely where in the brain where we are stimulating.

The value of this stimulation effect is twofold; the first is DIAGNOSTIC- where we can non-invasively identify specific areas of motor function and specific areas of language function. The second function is THERAPEUTIC- where we can actually help change or fix an identified brain disease by using TMS. Right now,  we as a company hold FDA clearances for pre-operative motor and language mapping as well as treating major depressive disorder. For depression: the general understanding (still under exploration like a lot of things in medicine, particularly with the brain) is that the metabolic activity in the left dorsal lateral prefrontal cortex in a diseased or depressed patient is lower and usually significantly lower than in out of a healthy patient. In order to increase the metabolic activity and the left dorsal lateral prefrontal cortex or left DLPFC you can use TMS to artificially stimulate our cause the neurons to fire in the left DLPFC and that increases the neuronal excitability level and helps improve the depressive state of that patient.  This is one example of how to therapeutically use TMS to improve health and performance.

You can also use a different set of TMS stimulation parameters to inhibit brain regions that may be overactive. That is, you can actually slow down the functioning of the cortical area that you're targeting. Hence, TMS in therapeutics may be a versatile option to treat a range of neurologic and psychiatric disorders in the future.

2021 REVIEW OF POST TRAUMATIC RECALL
(A field report by: Jessica Connell-Glynn, LCSW)
PTSD can occur in all different extremes with at-risk professionals (like cops, responders and veterans). The trauma that they experience are above the ordinary that they could cause extreme flashbacks, anxiety and depression—heavily affecting their quality of life. The average civilian is also prone to this disorder starting with MICRO-TRAUMAS that can happen to everybody throughout any point in their lifetime.  Usually stemmed from childhood issues, micro-traumas actually shape the way an individual reacts to other people. As an example, child bullying may lead to developing a protective or defensive personality disorder.  Anytime they feel disrespected or embarrassed by others, feelings of extreme uncontrollable anger may arise without knowing the source of the hurt or why they're acting in that way.  This dilemma often causes problems in relationships.

LANGUISHING: EMOTIONAL CRISIS FROM THE PANDEMIC
By: Jessica A. Conner-Glynn, LMSW  / Edited by: Cheri Ambrose (NYCRA NEWS writing staff)
Observing the many emotional after-effects of our ‘new Covid lifestyle’, I find a link between stepping away one's our work environment and a direct improvement in one’s well-being. The surge of the coronavirus pandemic brought a unique kind of widespread emotional disorder called LANGUISHING- an issue identified as somewhere between a downturn ‘blah’, emptiness or depression causing a type of burnout from mandatory social distancing.  Many of us are working really hard in the same place that we actually live- removing that safe separation between work and home that we once had.  The shift in working at home takes away that place to relax and shut down, eventually causing a state of emotional exhaustion from staying ON (and on guard) the whole time.  There is also a physical aspect to all this; the new sedentary lifestyle of working from home eliminates the vital energy stimulation from circulation and cardiovascular activity of physical traveling.  In addition, self-isolating has induced an unhealthy weight gain in many, also adding to this malaise.

HOW STRESS CAN MAKE YOU SICK By: Dr. Jesse A. Stoff
For our well-being, stress is so powerful that it can affect just about every function in our bodies right down to our cells. Stress can cause major weight gain, headaches, hair loss, dental problems, major fatigue, respiratory issues, digestive problems, psychological & focal disorders.  It is also known to affect the performance of our immune system - allowing for skin issues, colds, allergies and a host of chronic diseases. Stress management is important for more than psychological health; stress can greatly affect immune functioning, inflammation and even hormonal balance. Studies have shown that stress can reduce natural killer cell function. These are normally the cells that attack foreign invaders including viruses, bacteria and fungi. They are also the cells that patrol the body as the first line of defense against the development of cancer.

RETINAL & TRANSCRANIAL IMAGING By Dr. Robert L. Bard
Another device used by imaging specialists to detect mental distress is through an EYE SONOGRAM or  Real Time Sonofluoroscopy of the orbital soft tissues of the eyes.  This process is performed in multiple scan planes with varying transducer configurations and frequencies.  Power and color Doppler use angle 0 degrees and PRF at 0.9 at the optic nerve head. 3D imaging of optic nerve and carotid, central retinal arteries and superficial posterior ciliary arteries performed in erect position before & after verbal communication and orbital muscle tissue contractions may be observed as a precursor to visual changes in facial expression. Retinal arterial directional flow is also measured with peak systolic and diastolic values. Bulging of the optic nerve head is checked as increased intracranial pressure may be demonstrable in this condition. Other innovations such as the TRANSORBITAL DOPPLER, 3D/4D VESSEL DENSITY HISTOGRAM and the RETINAL OCT (optical coherence tomography) are also being explored in the pursuit of studying brain performance through the eyes.  An expanded review on these solutions will be available in part 2 of this report.