A REVIEW OF TOXIC COMPOUNDS FROM EMERGENT FIRE ZONES

FOREWORD
By Dr. Robert L. Bard, cancer diagnostic specialist (NYC)
After a decade past the 9/11 disaster, news broke of unique and advanced cases of CANCER arising in droves. A growing number of the same individuals exposed to the toxic fumes and plumes of hazardous particles in the danger zone have recently contracted aggressive cases of CANCER and were in immediate demand for medical care and desperate need for advanced research and support.

This spike in cases can only come from ‘dormant’ cells or recurrence (usually with a vengeance) – such as cases of cancer tumors in the lung, liver, prostate, kidney, brain, skin and even the eye. To troubleshoot each case, it would be advantageous to take a crash course in toxicology and to recognize the chemical compounds that BATHED all responders during the event.  Understanding these chemicals can help us pursue their behaviors (on the body) and their long and short term effects. 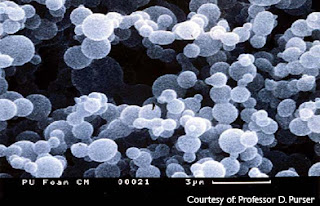 TOXICOLOGY 101: A THREAT TO FIREFIGHTERS HEALTH
As part of our evaluation of all occupational illnesses contracted by first responders, we enter the world of TOXICOLOGY- the branch of science focused on the effects and detection of poisons.  It is also the discipline overlapping chemistry, biology and pharmacology- studying the adverse effects of chemical substances on living organisms.  In pursuit of first responders’ safety as far as chemical effects on the body, we connected with Professor David Purser of the Hartford Environmental Research (UK), a renowned toxicology expert who conducted major reviews on fire-exposed carcinogens published worldwide. “9/11 was unusual in that a major environmental hazard resulted from the dust cloud released as and after the Towers collapsed,” says Prof. Purser.  “The dust inhaled by responders at the time, and afterwards working at the site, has resulted in serious ongoing and developing health conditions and to this day.

For fires in general, there is also increasing evidence and concern regarding FF exposure to carcinogens, especially from soot contamination to skin and clothing following attendance at incidents and during training.” An abstract from Prof. Purser’s latest presentation – “ Toxins Including Effects of Fire Retardants, During Fires and Post-Fire Investigation Activities” indicates a remarkable breakdown of some of the major toxins and carcinogenic compounds that the average firefighter would be exposed to.

Below is a list of common toxic elements found in active fires and post-fire investigations that first responders have been known to be exposed to.


According to Prof. Purser’s presentation on “Fire Retardants and their Potential Impact on Fire Fighter Health” ** the highest and most active toxins threatening survival during or immediately after a fire are:

These toxins are usually found within active fire zones- either inside the fire event itself or downwind plume in the form of residues and soot or lethal fragments activated at high temperatures or in airborne smoke.  These asphyxiant gases, irritants and particulates are the main causes of injury and death of fire victims exposed to high concentrations inside burning buildings.   Asphyxiant gases cause collapse with loss of consciousness during a fire, leading to death if exposure continues.  Irritants and smoke particulates cause pain to the eyes and lungs, with breathing difficulties, which inhibit escape during a fire and can lead to lung inflammation and edema within a few hours of rescue, which can also be fatal.  Those surviving may make a good recovery or suffer long term neurological or cardio-respiratory health effects, depending on the severity of the exposure. Those most at risk from these effects at the fire scene are building occupants and emergency responders not protected by breathing apparatus.

Beyond the immediate fire zone, especially outside a burning building, or during wildfires, these toxic smoke products are considerably diluted by mixing with outside air, so are generally not immediately life-threatening.   The main hazards to unprotected persons exposed to the diluted smoke plume in the surrounding area are health risks from inhalation of smoke irritants and soot particulates, or from inhalation of mineral particles and fibers.  The immediate effects of exposure are mainly eye and throat irritation, with a sore throat and cough in some cases over a period of a few days, although persons with pre-existing respiratory or circulatory health conditions may be more severely affected.  Longer term health hazards following a single exposure may result from inhalation of sensitizers (such as isocyanates or formaldehyde), which can cause asthma, or from some mineral dusts and fibers, which may remain in the lungs. Health risks from exposure to carcinogens during a single incident are generally low, although the World Trade Center dust and some chemical fires may be exceptions.

Health risks to firefighters result mainly from repeated exposures to inhalation of smoke toxicants and contact with soot deposits.  These contain a wide variety of carcinogens, so that cumulative exposure over years may present an increased cancer risk.  The hazards arise from inhalation of smoke, soot or mineral fibers, but also from soot contamination of skin or clothing.   This can result in dermal, inhalation or oral ingestion, resulting in increased exposure to carcinogens, including dioxins and dibenzofurans, during post-fire activities. Halogenated fire retardants (especially chlorine and bromine systems), present possible increased health risks to fire victims and firefigthers during fires due to inhibition of combustion in the vapor phase resulting in inefficient combustion with an increase in yields of toxic carbon and nitrogen compounds, in addition to the formation of acid gases, dioxins and dibenzofurans under all fire conditions..**


“IT ALL STARTS AT THE LUNGS"
Historical Patterns of Carcinogenic Reactions from Environmental Disasters  by: Dr. Jesse Stoff 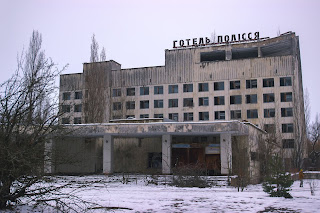 If you review the victims of  a disaster such as the radioactive fallout in CHERNOBYL, then compare it to the dust from the 911 catastrophe, you can find a similar behavior as far as how fatalities come to appear within a certain timeline. There’s the initial contamination that results in immediate illnesses- and then there’s a major wave of cancer cases that arise a decade later. These cancers are delineated on the CDC website and are occurring, undoubtedly, because of the mixture of toxins that people have been exposed to. The volume of these toxins are absorbed into their bodies since 9/11 (while working with the clean-up efforts) and can't get rid of them.

We are seeing patients with very unusual blood borne cancers that have had very unusual genetic profiles  -undoubtedly because of the unusual combination of carcinogenic toxins that people were exposed to that have been lingering in their system for so many years. We're also seeing a marked increase in Monoclonal Gammopathies (MGUS) and Myelofibrosis which is progressive damage to the bone marrow that itself can become a cancerous process. We're seeing many people suffering changes to the structure and functioning of their immune system even without yet developing a cancer but for those kinds of changes their risk of developing skyrockets. Also, because of the shifting in their immune system we see a significant increase in the level of different kinds of allergies (including environmental based) that have become more prevalent and worse than before the exposure to this kind of toxic material.

In essence, the destruction and suffering continues.

RESPONDERS PULMONOLOGY REVIEW
Following the logical path of carcinogen, one would start from how environmental contaminants would make their way into the body; through the respiratory ports. As seen in the toxicology section of this article, these foreign substances range from particulates like metals and acids to microfragments to molecular-sized compounds whose behaviors vary from mild irritants to lethal poisons.  More often than not, these compounds can trigger cell mutations in our physiology as well as attack our very immune system to penetrate our defenses for tumors to grow.

Our responders’ health report brought us to interview  Pulmonary and Sleep Medicine Specialist Dr. Mayank Shukla (NYC) who helped identify the various diagnostics and screening procedures for first responders often start with a Pulmonary Function Test to study a patient’s airway size, and then a Bronchodilator Challenge Test to identify and distinguish between asthma and COPD.   Another protocol for patients exposed to airborne contaminants is examining airway resistance and looking for Upper Airway Resistance Syndrome (UARS), Sleep Apnea and other breathing disorders caused by an impairment of the airway size.

The concern for the responder’s air passage brings telltale signs of possible impending issues based on their condition that brings warning signs of what may lie ahead- in the lungs, the bloodstream etc.  There's another test which is available called NIOX designed for a patient to have allergy component or asthma that also is very sensitive, to look at the lung inflammation for these patients. 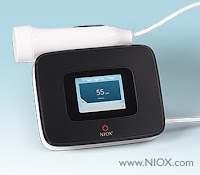 During airway inflammation, higher-than-normal levels of nitric oxide (NO) are released from epithelial cells of the bronchial wall. 4 The concentration of NO in exhaled breath, or fractional exhaled nitric oxide (FeNO), can help identify allergic/eosinophilic inflammation, and thereby support a diagnosis of asthma when other objective evidence is lacking. (See NIOX.com)

There are other testing available which helps us to do a direct visualization of the upper and lower levels. For example, there's the bronchoscopy for the lungs and air passages and then there's the laryngoscopy to visualize the nasal cavity, the sinus, sinusitis, the larynx, because many of these patients have acute or chronic laryngitis because getting exposed to the several toxins. Also, many of them have gastro esophageal reflux, so when you look at that endoscopy, you can realize that this patient have, you know, chronic inflammation of the, not only for a lower airway, but also with upper airway as well.


Disclaimer & Copyright Notice: The materials provided on this website are copyrighted and the intellectual property of the publishers/producers (The NY Cancer Resource Alliance/IntermediaWorx inc. and Bard Diagnostic Research & Educational Programs). It is provided publicly strictly for informational purposes within non-commercial use and not for purposes of resale, distribution, public display or performance. Unless otherwise indicated on this web based page, sharing, re-posting, re-publishing of this work is strictly prohibited without due permission from the publishers.  Also, certain content may be licensed from third-parties. The licenses for some of this Content may contain additional terms. When such Content licenses contain additional terms, we will make these terms available to you on those pages (which his incorporated herein by reference).The publishers/producers of this site and its contents such as videos, graphics, text, and other materials published are not intended to be a substitute for professional medical advice, diagnosis, or treatment. For any questions you may have regarding a medical condition, please always seek the advice of your physician or a qualified health provider. Do not postpone or disregard any professional medical advice over something you may have seen or read on this website. If you think you may have a medical emergency, call your doctor or 9-1-1 immediately.  This website does not support, endorse or recommend any specific products, tests, physicians, procedures, treatment opinions or other information that may be mentioned on this site. Referencing any content or information seen or published in this website or shared by other visitors of this website is solely at your own risk. The publishers/producers of this Internet web site reserves the right, at its sole discretion, to modify, disable access to, or discontinue, temporarily or permanently, all or any part of this Internet web site or any information contained thereon without liability or notice to you.