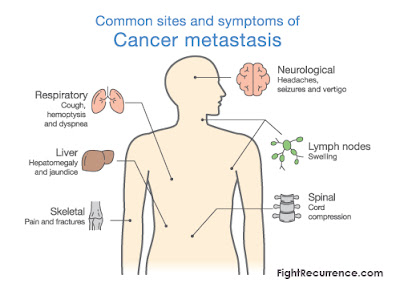 When cancer comes back after treatment, doctors call it a recurrence-  or recurrent cancer. Finding out that cancer has come back can cause feelings of shock, anger, sadness, and fear. But you have something now that you didn’t have before—experience. You’ve lived through cancer already and you know what to expect. Also, remember that treatments may have improved since you were first diagnosed. New drugs or methods may help with your treatment or in managing side effects. In some cases, improved treatments have helped turn cancer into a chronic disease that people can manage for many years.

Recurrent cancer starts with cancer cells that the first treatment didn’t fully remove or destroy. This doesn’t mean that the treatment you received was wrong. It just means that a small number of cancer cells survived the treatment and were too small to show up in follow-up tests. Over time, these cells grew into tumors or cancer that your doctor can now detect. [1]

There are two flavors of recurrence- one being LOCAL recurrence and the other is METASTATIC. Local recurrence means that should for whatever reason some cancer tissue or cells get left behind, cancer can come back (a curable situation). In the case of breast cancer (per se), recurrence can also mean METASTATIC- where it can re-appear outside the breast area and outside of the lymph nodes in the armpit.  Now it doesn't mean it's not treatable, but it essentially means that the cancer now has traversed from the local area to a distant site, set up shop and grown to a point where it's now detectable in higher numbers.

Recurrence is really a math game. The numbers would tell you that by the time that happens, there's so many cells and so many cell divisions that the heterogeneity of cancer (the main treatment challenge) prevents us from being able to cure metastatic disease, because we don't currently have enough drugs that can get rid of all of those different cancer cells. A patient's breast cancer, as an example, is not uniform. It's a dynamic process. Every time a cancer cell grows and divides those two daughter cells (if you will) are slightly different from one another.  Whereas normal cells are exactly the same when they grow and divide-- they have to be (they're identical twins), this is the problem with cancer; it is a disease of DNA gone bad, but it's also underlying of what we call genetic instability that leads to heterogeneity making cancer cells resistant to many drugs.
As far as heterogeneity, by the time you can see a cancer tumor at one centimeter, that's a billion cancer cells, and they're all a little bit different from one another. And so if that cancer cell recurs in the bone, the liver, the brain, the lungs it's left a trail of breadcrumbs. So we know it's more than just a cubic centimeter. That's already a billion plus cancer cells. So even if you cut it out, there's all these breadcrumbs that are already seeded everywhere that we can't see.  There's going to be at least one cancer cell resistant to a given therapy, because of all the changes in DNA as cancer cells divide, meaning the cancer cell from one to the next is a little bit different. And that's what makes cancer so tough to beat because we're not dealing with a static target. We're dealing with a moving target. And even though we can get 99.9% of the cells with a drug or series of drugs, that 0.1% of cells left behind is eventually going to come back.

And that point when it comes back, cancer cells gets even more heterogeneity and more changes and more, again, evolution of different subclones as we call it. That's the fundamental crux and problem with cancer and why it's so tough to beat. And this is not different when you think about some infectious diseases like tuberculosis, right? I mean, that's why we need four drugs to cure patients with tuberculosis because it evolves and changes. HIV is the same way. So, I also use those examples to point out we've controlled those diseases. In some cases, we cured those diseases and we can do the same for cancer.

Once you do enough Google-searching-especially for key terms like "CANCER PREVENTION" and "STAY IN REMISSION", you'll learn how to come up with a simple plan to keep cancer away- or increase the likelihood of beating cancer with the comprehensive Early Detection & Prevention plan. In each case, much can be done to prevent the current stage. The first step is to GET MORE FAMILIAR WITH YOURSELF.

• Be aware of your genetic lineage: risk of cancer increases upon heredity. The first place to look is within your own dna or family history. Many cancers tend to travel down generations. It can also have the tendency to skip one generation and appear in the next one.

• Periodic Checking of your body for any anomalies like lumps, bumps, discolored bruises or growths. Self-checking is the first base. Also stay on top of unusual feelings like frequent headaches, unique pains and strains- anything that feels out of the ordinary. Take nothing for granted when it comes to your body.

• Know your environment: Many health issues are known to be caused by environmental toxins. Where you sleep, eat and work could be affecting how you feel later. Some health hazards are fairly visible and apparent while others may need some historical research in your area where there may have been potential chemical wastes or spills in the past. If you know of such issues, further research, demographic studies, protective measures and targeted checkups may be your next step. 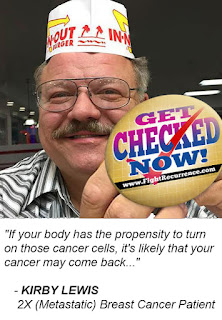 METASTASIS: RECURRENCE WITH A VENGEANCE
By: Kirby Lewis

In 2012, I was diagnosed with stage two (male) breast cancer.  Standard operating procedure was having me undergo a mastectomy to my left breast.  It came with all the physical impact of treatments and surgery but I wasn't too worried about the outcome. I was sure that it wasn't going to kill me because I found that most people don't die from stage one, two or three.

Then, by 2016, I had recurrence. As a lot of people know, recurrence is about 30% of early stagers.  I sensed the first time that it was going to come back-- and that when it did, it was going to be metastatic.   Metastasis is when those rogue cancer cells that are in the area of the breast tissue decide to venture out into another neighborhood of the body. When that happens, they tend to go to the liver or the pancreas or, the kidneys or the bones or even the brain. I had metastases in both lungs and in my spine so it was quite alarming.

Through a battery of testing, it was unnerving to find out how fast it went from being non-present in my body to being everywhere-- in my lungs and in my spine. Basically, I was looking at a six week period where I went from clear lungs, clear scans and within six weeks, my, my lungs lit up like Christmas trees.

I think that what people can learn from this is that you should never take the changes in your body lightly. Do self exams. And if you find something that is unusual, go have it checked out. It's $50 for a doctor visit and that's $50 well spent rather than buying a coffin. If your body has propensity to turn on those cancer cells, flip that switch, then (my thinking is that) it's likely that it is going to come back in some other form. And I hope that it doesn't. When someone is designated cancer free, I would love for them to think that that's it. But they do need to be diligent. And they do need to be cognizant and aware of the fact that the possibility will always exist.

The New York Cancer Resource Alliance is committed to seeking out SMART SCIENCE from the top sources of current and most helpful solutionists. Because there is no SILVER BULLET to cancer, a recent article from our generous friends at Boehringer-Ingelheim shed some light into some of their greatest cancer findings from recent research work about "undruggable" targets and their views on how to approach them.

Despite significant progress over recent decades, many key molecular drivers for a wide range of cancers remain undruggable. Only 10-15% of cancer patients currently benefit from drug treatment targeting the genomic aberrations driving their cancer. Our mission is to change this. We’re taking cancer on by working on pioneering approaches to identify key cancer cell dependencies that drive the growth and proliferation of cancer cells. Our scientists are developing novel therapies to turn these drivers off, and combining them with specially selected partners to switch off multiple drivers, as well as with immunotherapy to harness the patient’s immune system to fight cancer cells.

FINDING SMART COMBINATIONS TO TACKLE ‘UNDRUGGABLE’ TARGETS
We’re digging deep into the science and taking a precision approach to develop smart combinations to bring the greatest benefit to patients. The first step is to find cancer-cell directed therapies that induce rapid tumor shrinkage. But we know that the long-term efficacy of current targeted therapies has been limited by the development of resistance, leading to relapse and disease progression. Cancer cells quickly find ways to circumvent the effects of targeted drugs by mutating or re-routing along alternative pathways. So we’re using a smart science approach to understand molecular pathways at a deep level to identify the ‘Achilles heels’ where we can potentially outwit the cancer cells at the same time as finding innovative ways to increase and prolong anti-cancer effects with combination partners.

Immune therapies often take longer to act than cancer cell-directed therapies but can achieve much more long-lasting responses. So part of our smart combination strategy is exploring how to transform ‘cold’ tumors, which have no, or limited, immune system activity, making them unresponsive to immuno-therapy, into ‘hot’ tumors so that the patient’s immune system can be recruited to fight cancer with immuno-oncology therapies. By combining both approaches, patients gain the immediate benefit and high responses of cancer-cell targeted therapies and the longer-term survival benefit of immunotherapy. (See complete article: A Smart Science Approach to Cancer Combinations- by Norbert Kraut, Ph.D., Global Head of Cancer Research, Boehringer Ingelheim)
Posted by NYCRA NEWS at 8:43 PM