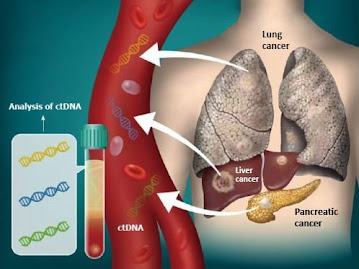 Two blood tests recently approved by FDA for use in some people with cancer, known as liquid biopsies, identify genetic changes by scanning DNA that tumors have shed into the blood.  (image credit: ref: #1)
The Food and Drug Administration (FDA) has approved two blood tests, known as liquid biopsies, that can help guide treatment decisions for people with cancer. The tests, Guardant360 CDx and FoundationOne Liquid CDx, are made by different companies and were approved separately.

Doctors have traditionally based treatment decisions on features like the organ in which the cancer started growing, whether the cancer has spread, and whether the patient has other health conditions. Now they often use another feature to guide treatment: genetic changes in the tumor.

Certain therapies, called targeted therapies and immunotherapies, work best against tumors that have specific genetic changes. The newly approved tests identify genetic changes, including mutations, by scanning DNA that tumors have shed into the blood.

Doctors can then use that information to determine if there is a targeted therapy or immunotherapy that is likely to work for the patient. Analyzing genetic changes in a patient’s cancer is called tumor profiling, genomic profiling, or tumor sequencing.

Liquid biopsies can sometimes be an alternative to a traditional biopsy, in which a sample of a tumor is removed with a needle or during surgery. They are considered less invasive and quicker than a traditional tissue biopsy.

“Even though the tests have been around for a while, we don’t know how useful they’re really going to be in the clinical setting,” said Ben Ho Park, M.D., Ph.D., of Vanderbilt-Ingram Cancer Center. Many details about how the blood tests may be incorporated into everyday care for people with cancer, including who should get them and whether the cost is covered by private insurance companies, are still being ironed out.  What the FDA’s stamp of approval provides, Dr. Park explained, is validation that the results of a blood-based tumor profiling test can be used to guide the selection of a targeted therapy.

“It’s great that we’ve crossed that hurdle now. It’s great for patients [because] it’s easier to get,” he said.

The strategy of relying on a (PSA) blood test as the precursor to a biopsy required significant reassessment.  Though approved by the FDA in 1986 as the gold standard for monitoring cancer relapses, increasing reports continue to indicate that elevated PSA levels in over 70% of men show a false positive reading- and does not conclude a malignant cancer. (NIH ref). Because of the inaccuracies of the PSA test and the risk of side effects, many centers are now using imaging solutions like ultrasound 3-D Doppler and MRI before considering a biopsy.

Patient-Specific Anxiety: "My PSA was 22. I had a biopsy; it was benign...GOOD! The biopsy showed inflammation, so I had a (surgical) biopsy I didn’t need... BAD!  There has to be a better way!” 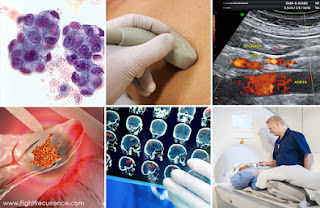 CANCER IMAGING:
The GenX Diagnostic Solution
Medical imaging (and screening) especially of cancer tumors has advanced since the establishment of the x-ray in 1895.  Imaging earned the acceptance in the medical community as a low-risk, reliable and non-invasive (no-cutting) alternative.  It is widely employed today as a routine and standardized diagnostic protocol in almost every area of healthcare.  Treatment specialists and research scientists alike rely (solely) on medical imaging technology as the go-to protocol to investigate a patient's physiological condition in pathology studies.

The DIGITAL MOVEMENT and the "end of FILM in radiology" was part of the global tech evolution- driven by the "Economics of Scale theory of Faster-Better-Cheaper". The digital imaging revolution harvested and processed images from an electronic photo conductor, managed bio-information into electronic pixels for more efficient management of diagnostic studies.  The Digital state allowed for computerized intervention to optimize and expand the data acquiring process to new heights of study including 3D modeling- offering a 3D visualization of anatomical studies.  This also paved the way for the induction of AI (artificial intelligence) which was developed to automate analytical paradigms (algorithms) for quicker analysis, advanced workflow, optimized visual dissection, extrapolation and 'prediction' of any biological information with remarkable performance. (see complete article)

Awareness 4aCure
Awareness for a Cure is a FREE full service resource publication for all cancer sufferers and survivors on Long Island and its proximity. AFAC publishes existing grants, posts educational how-to's written by professional experts, publishes current L.I. fundraiser news, presents any and all Island-based cancer foundations and showcases survivor stories through the AFAC blogs and Video Channel. AFAC NEWS comprises of covering 5k walks/races and fundraising efforts to raise $$ to find a cure for debilitating diseases. AFAC is established under several non-profit groups: Best Answer for Cancer (tm) and S.I.M.R. (Stoff Integrative Medical Research) and welcomes all cancer-related information for the Long Island reader.